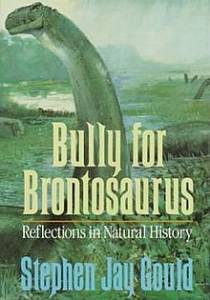 The title essay, “Bully for Brontosaurus”, discusses the theory and history of taxonomy by examining the debate over whether Brontosaurus should be labelled Apatosaurus. In “Justice Scalia’s Misunderstanding”, Gould dissects and decisively rejects Antonin Scalia‘s dissent in the United States Supreme Court case Edwards v. Aguillard that overturned the last creationist statute in the country. Gould claimed his favourite essay to be “In a Jumbled Drawer” which discusses the debate between Nathaniel Shaler and William James over whether the improbability of our having evolved necessitates divine intervention (Gould, like James, argues no); the essay includes a letter from former President Jimmy Carter as a postscript, which discusses the issue.

Faculty Comment: John Colicelli
Stephen Jay Gould was an accomplished paleontologist, polymath and one of the best science writers of the past century. Each essay tackles a fascinating topic and never fails to take you in unexpected directions. There are several other published collections of his essays.