Present at the Flood: How Structural Molecular Biology Came About 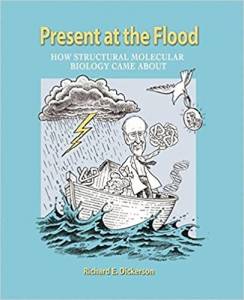 This book chronicles a revolution in molecular biology–the crucial 30 years (roughly between 1933 and 1963) during which our ideas about proteins and nucleic acids changed from those of formless, functionless organic chemicals into precisely structured molecular machines with specific biological purpose. Proteins evolved from being colloidal micelles or globules with no specific structure (or even sequence) into quite precisely structured molecular catalysts, carrier proteins, and information-sensing agents. Indeed, the very idea that the amino acids of a protein were linked in a specific order in long linear chains was not accepted initially. During this same time period, DNA changed from being a sterile repeating polymer of no particular function (the tetranucleotide hypothesis) into a double helix that serves as the archive of genetic information. Without this revolution, molecular biology would not exist today, and biochemistry itself would still be a collection of recipes and unconnected empirical observations about a cellular slime known vaguely as “protoplasm.”

Faculty Comment: David Eisenberg
Richard E. Dickerson is a retired professor of UCLA Chemistry and Biochemistry.   As a postdoctoral fellow at the Laboratory of Molecular Biology in Cambridge UK, Dickerson collected the x-ray data and determined the x-ray phases for the first atomic structure of a protein–myoglobin.  Years later in his own lab, Dickerson and his mentee Horace Drew determined the first atomic structure of DNA, validating the Watson-Crick structure inferred from the fiber diffraction data of Rosalind Franklin.  These two studies suffice to mark Dickerson as one of the most important structural biologists of all time.
As he was retiring from UCLA, Dickerson wrote the book “Present at the Flood–how structural molecular biology came about.”  The value of this book for students is beautifully described by Dickerson at its front:
“The title of the book, ‘Present at the Flood,’ arises from an essay by the philosopher John Locke on the nature of proof.  To paraphrase Locke, eyewitness testimony is superior to circumstantial evidence: ‘Had I myself seen the Ark and Noah’s Flood, as I saw the overflowing of the Thames River last winter, then I should have no more doubts about the reality of the Biblical Flood than about the overflowing of the Thames.’  As you read the papers in this book, you will become eyewitnesses to the structural revolution.”