The Cuvier-Geoffrey Debate: French Biology in the Decades before Darwin (Monographs on the History and Philosophy of Biology) 1st Edition 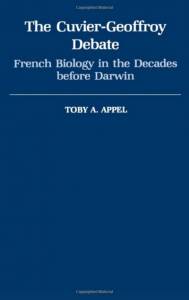 For scientists, no event better represents the contest between form and function as the chief organizing principle of life as the debate between Georges Cuvier and Etienne Geoffroy Saint-Hilaire. This book presents the first comprehensive study of the celebrated French scientific controversy that focused the attention of naturalists in the first decades of the nineteenth century on the conflicting claims of teleology, morphology, and evolution, which ultimately contributed to the making of Darwin’s theory. This history describes not only the scientific dimensions of the controversy and its impact on individuals and institutions, but also examines the meaning of the debate for culture and society in the years before Darwin.

Faculty Comment: Edward De Robertis:
Steven Jay Gould recommended I read this book on the famous 1830 debate at the French Academy of Sciences.  Geoffroy Saint-Hilaire proposed that a unity of plan existed among animals.  When we isolated the conserved Hox and Chordin genes, the inspiration was already there for our proposal of a complex urbilaterian animal ancestor.  This was a foundational even in Evo-Devo.