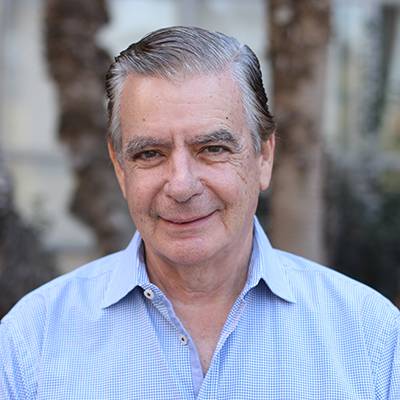 Born in Boston, Mass., Edward M. De Robertis grew up in Montevideo, Uruguay where he received his M.D. in 1971.  After completing a Ph.D. in Chemistry at the Leloir Institute in Argentina, he trained in Xenopus embryology under Sir John Gurdon in Cambridge, England. His work in developmental biology has contributed to the realization that antero-posterior and dorso-ventral patterning genes have been conserved throughout animal evolution. His work on Chordin, a secreted antagonist of ventral BMP signals that is regulated by proteolytic cleavage, has provided a new paradigm for intracellular signaling.

The De Robertis laboratory studies how long-range cell communication between the dorsal and ventral sides of the embryo occurs through the diffusion of growth factor antagonists. Investigations on the Chordin BMP antagonist showed that facilitated diffusion of a morphogen takes place in the narrow extracellular space that separates the ectoderm from the endomesoderm. This gradient is further integrated with Wnt signaling through the sequestration of the enzyme GSK3 inside multivesicular endosomes.

How Do Cells Communicate Over Long Distances?

Isolating the molecules involved in the induction of cell differentiation by a region of the embryo called Spemann’s organizer has been the Holy Grail of embryology. Using the frog Xenopus, we have isolated Chordin, Cerberus, Frzb-1, Crescent and other molecules, revealing that growth factor antagonists secreted into the extracellular space mediate the formation of embryonic signaling gradients.

The Chordin Gradient
Chordin is produced dorsally and another secreted protein, Sizzled, is expressed in the ventral side. We used molecular cloning and biochemical methods to discover a large network of Chordin-interacting proteins that form a self-regulating gradient of BMP activity. The three germ layers of the embryo – ectoderm, mesoderm and endoderm – respond coordinately to changes in BMP signaling, differentiating into multiple cell types. A gradient of Chordin protein diffuses along a narrow region that separates the ectoderm from anterior endoderm and mesoderm. This fibronectin-rich extracellular matrix (ECM) is present in all vertebrate embryos. Chordin forms a smooth gradient that encircles the embryo, diffusing over a distance of 2 mm in this signaling highway between ectoderm and mesoderm. Chordin reaches very high concentrations in this narrow space.

Integrating BMP and Wnt Signaling
Embryonic morphology is regulated by other morphogens, such as Wnt and fibroblast growth factor (FGF). How are these signaling pathways integrated seamlessly in the embryo? Wnt signals by inhibiting a protein kinase called glycogen synthase kinase 3 (GSK3), but the mechanism by which this occurs was unclear. While investigating the BMP transcription factor Smad1 phosphorylation by GSK3, we discovered a novel cellular mechanism for cell signaling. Upon Wnt signaling, cytosolic GSK3 binds to the Wnt receptor complex and is translocated inside multivesicular bodies (MVBs). In this way, GSK3 becomes sequestered from its many cytosolic substrates.

Remarkably, the sequestration of GSK3 extends the half-life of many proteins in addition to the well-known Wnt target β-Catenin. Our bioinformatic analyses revealed that 20 percent of human proteins contain three or more putative GSK3 sites in a row. GSK3 sites can be predictors of proteins regulated by Wnt. For example, we find that in the presence of FGF, which promotes a mitogen-activated protein kinase that primes phosphorylation by GSK3, Smad4 activity is potently increased by Wnt. This indicates that the transforming growth factor β/Nodal morphogen gradient, which is fundamental for mesoderm induction, is intimately integrated with the FGF and Wnt gradients. Smad4 is a crucial tumor suppressor that is depleted during progression of pancreatic, colorectal, and prostate cancers. The discovery that Smad4 activity is not constitutive but rather regulated by FGF and Wnt explains its tumor suppressor activity.

In conclusion, efforts to uncover the molecular basis of embryonic long-distance cell signaling have shown that the differentiation of embryonic tissue types is regulated by an extracellular gradient of proteins diffusing between ectoderm and endomesoderm. Studies of basic embryonic patterning mechanism led to the discovery of unexpected connections between endosomal trafficking, growth factor signaling, and protein degradation, which are being actively explored in our laboratory.