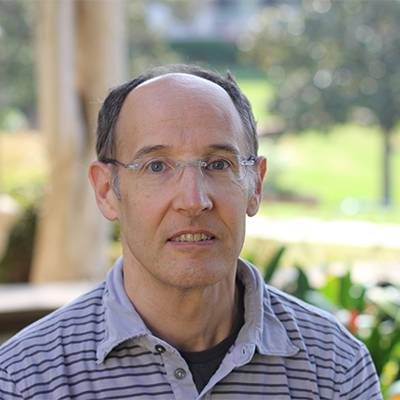 John Colicelli grew up in New Jersey and obtained his undergraduate chemistry degree from Rutgers University in 1979.  After two years of service as a teacher in the Peace Corp, Dr. Colicelli studied retrovirus replication with Dr. Stephen Goff at Columbia University and received his biochemistry PhD in 1986.  As a post-doctoral researcher with Dr. Michael Wigler at Cold Spring Harbor Laboratory, Dr. Colicelli investigated signal transduction by RAS and other G proteins.  In 1990 he joined the UCLA Biological Chemistry Department where he is now a Professor and Vice Chair.

In addition to his research program, Dr. Colicelli teaches cell biology to undergraduate, graduate and medical students.  He also contributes to administrative functions at the department, medical school and university levels.

Dr. Colicelli’s research is focused on cell structure and function, with a particular interest in signal transduction.

Many different signals are used for instructing cells to grow, proliferate or differentiate.  Each signal must be correctly interpreted and transduced in order to achieve the proper cell response.  The RAS signal transduction pathway is of particular importance in determining cell responses to various stimuli.  RAS proteins undergo a cycle of conformational changes correlated to binding and hydrolysis of the guanine nucleotide GTP. As with other signal proteins, RAS transduces information through direct contact with “effector” proteins that mediate physiological effects.  The Colicelli lab has described a family of RAS signal effector proteins, called RIN1, RIN2 ,and RIN3.  Upon stimulation by activated RAS, RIN proteins mediate cytoskeleton remodeling and endocytosis.  The effects of RIN protein signaling pathways depend on the cell type and form of stimulation. Three specific areas of investigation are being pursued in the Colicelli lab.

Cancer is a disease of uncontrolled cell proliferation, and mutations in RAS signaling components are among the most common causes of cancer.  RIN1 appears to act as a breast cancer suppressor, probably by down regulating growth factor signaling, but RIN1 promotes leukemias by stimulating downstream tyrosine kinases activity.  The lab is attempting to manipulate RIN1 signaling in ways that block cancer progression.

Invasive bacteria, including pathogenic strains of Listeria, enter intestinal cells through a mechanism that requires manipulation of endocytosis and the cytoskeleton.  RIN1 plays a direct but complex role during Listeria invasion of intestinal cells and subsequent dissemination to other organs.  The Colicelli lab is defining the contribution of RIN1 to this process and seeking ways to disrupt the spread of invasive bacteria.

Central nervous system neurons that control learning and memory are considered “plastic” because they change biochemically and structurally in response to past excitation of neurotransmitter receptors.  Neuronal plasticity requires signal transduction pathways that include RAS and RIN1.  Mice without the RIN1 gene show enhanced fear learning and reduced fear extinction (i.e. they are more likely to form and retain fear memories than normal mice), and this correlates with changes in the response of amygdala neurons.  The lab is trying to uncover the role of RIN1 in the fear learning process.