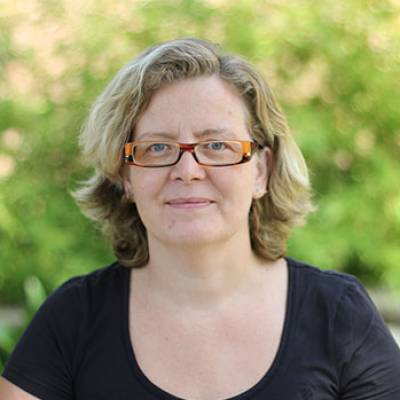 Kathrin Plath, Ph.D., is a Professor of Biological Chemistry at the UCLA David Geffen School of Medicine. Born in Germany, she received her master’s degree in Biochemistry at the Humboldt University in Berlin, examining MAP kinase signaling pathways. She joined the laboratory of Dr. Tom Rapoport at Harvard Medical School for her doctorate studies, where she examined how secretory proteins translocate through the endoplasmic reticulum membrane. Dr. Plath received fellowships from the Life Sciences Research Foundation and the Leukemia and Lymphoma Foundation for her post-doctoral training in epigenetics and stem cell biology with Dr. Barbara Panning at the University of California San Francisco and Dr. Rudolf Jaenisch at the Whitehead Institute at MIT. Dr. Plath joined the UCLA faculty in 2006. Her lab integrates cell biological, molecular, biochemical, and genomics approaches to study epigenetic mechanisms underlying pluripotency, differentiation and reprogramming, with a particular emphasis on how transcription factors reprogram cell fates; how long-noncoding RNAs modulate gene expression and chromatin states; and how the genome is folded in three dimensions to fulfill its functions. Dr. Plath is on the editorial board of Cell, Cell Stem Cell, Elife, and various other journals. She also serves as Director of the International Society for Stem Cell Research, and has received NIH’s New Innovator Award.

How Can One Engineer Cell Fate Change?

The ability to generate all cell types of the body has thrust embryonic stem cells (ESCs) into the spotlight as a panacea for regenerative medicine. The Plath lab has been among the first to reprogram differentiated cells from the mouse and human to an ESC-like state, known as induced pluripotent stem cells (iPSCs), by simply overexpressing four transcription factors, following a strategy first proposed by Shinya Yamanaka in 2006. With the generation of human iPSCs it became feasible to generate pluripotent cells from any person by reprogramming, which has ushered in an era of personalized medicine and “disease-in-a-dish” modeling. Current research in the Plath is aimed at systematically defining how the reprogramming transcription factors reset the identity of differentiated cells to pluripotency, in order to understand how cell fate decisions can be modulated. The process of reprogramming to iPSCs serves as a unique tool for the mechanistic dissection of the role of chromatin, transcription factors, and signaling pathways during cell fate changes.

X-Inactivation – Silencing of an Entire Chromosome

Mammalian genomes encode thousands of long-noncoding (lnc) RNAs, many of which play key roles in the regulation of gene expression. The X chromosome inactivation process is a paradigm for lncRNA-mediated chromatin regulation and refers to the transcriptionally silencing one of the two X chromosomes in female mammals. The lncRNA Xist provides a remarkable model to investigate how lncRNAs function, as it spreads from its site of transcription over the entire X chromosome to induce and maintain gene silencing, alter chromatin state, and modulate 3D chromosome architecture. Together with the Guttman lab at Caltech, the Plath lab created the first model to explain how Xist-RNA spreads along the X-chromosome, and is continuing to use this remarkable model system to further understand the role of lncRNAs on a mechanistic level.

Regulation of Gene Expression and Chromatin States in 3D

The DNA of eukaryotic cells is organized in a non-random fashion that allows for the accessibility of the gene regulatory machinery and for transcriptional and epigenetic changes that accompany cell fate changes. The Plath lab discovered that transcription factors and chromatin regulators play a key role in bringing together stretches of DNA from distant sites in the genome, providing a mechanism for how co-regulated regions co-localize in 3D in the nucleus. They are now developing models that comprehensively describe this spatial organization of the genome and the underlying molecular mechanisms; explore how this spatial organization of the genome contributes to the control of gene expression, and how changes in genome organization control cell fate transitions, cellular function, and disease processes. A second intriguing aspect of genome organization was revealed by their recent work on the mechanism of X-inactivation, providing an intricate link between genome organization and lncRNAs. They provided experimental support for a model where 3D genome organization is key to explain how the lnc RNA Xist finds its target site along the entire X chromosome, and where the RNA subsequently functions as a nuclear organization factor that induces a change in the spatial organization of the targeted chromosome. This paradigm provides a unique opportunity to gain insights into the molecular mechanisms of genome organization, its dynamic regulation and relevance for gene and chromatin regulation.