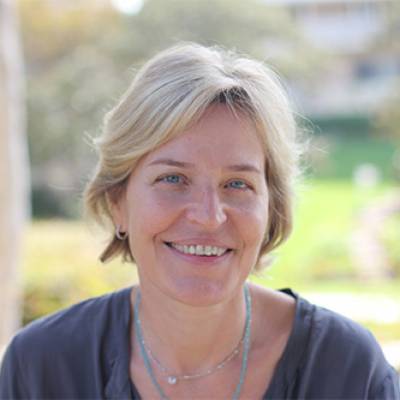 Kelsey C. Martin, M.D., Ph.D., is the Dean for the David Geffen School of Medicine at UCLA. She received her undergraduate degree in English and American Language and Literature at Harvard University. After serving as a Peace Corps volunteer in the Democratic Republic of Congo, she entered the MD-PhD program at Yale University where she studied influenza virus-host cell interactions in the laboratory of Dr. Ari Helenius, receiving her PhD degree in Molecular Biophysics and Biochemistry and her MD degree in 1992. She did her postdoctoral training in neurobiology with Dr. Eric Kandel at Columbia University, and joined the UCLA faculty in 1999. The Martin lab integrates cell biological, molecular and electrophysiological approaches to understand how experience changes brain connectivity to store memories. Their studies focus primarily on the spatial and temporal regulation of gene expression during long-lasting memory formation. Outside of UCLA, Dr. Martin is a Senior Fellow at the Howard Hughes Medical Institute Janelia Research Campus. She is on the editorial board of Cell, the board of directors for the Burroughs Wellcome Fund, the selection committee of the McKnight Scholar Awards and the board of directors for the McKnight Endowment Fund for Neuroscience. In 2016, she became a member of the American Academy of Arts and Sciences and a member of the National Academy of Medicine.

How Does the Brain Store Memories?

Experience changes the strength and number of synaptic connections between neurons in the brain. This process, known as synaptic plasticity, provides a cellular mechanism for memory storage. Research in the Martin lab is aimed at understanding the cell and molecular biology of synaptic plasticity in mouse and Aplysia model systems. The results of their research shed light not only on healthy brain function, but also on the causes of many brain disorders in which neuronal plasticity and memory formation are altered, including mental retardation, autism spectrum disorders, drug addiction, anxiety disorders, and Alzheimer’s disease.

Long-term forms of plasticity, such as those underlying long-term memory, require new RNA and protein synthesis. This means that signals are transported from the synapse, where they are generated, to the nucleus, where they alter transcription. The transport of molecules from the synapse to the nucleus of neurons is particularly challenging because synapses are often very far from the cell body. The Martin lab has discovered a role for the active transport of signals from stimulated synapses to the nucleus during long-term neuronal plasticity. Current research is aimed at identifying synaptically localized signaling molecules that undergo stimulus-induced active nuclear import during plasticity, and at understanding the cell biological pathways that mediate long-distance retrograde transport from synapse to nucleus. In studies focused on the transcriptional regulator CRTC1, the Martin lab is exploring how specific patterns of neuronal stimulation trigger specific programs of transcription, and how neuromodulators such as dopamine and norepinephrine regulate the programs of gene expression that give rise to long-lasting plasticity. This work provides molecular insights into the role of emotion and attention in memory formation.

Research in the Martin lab also addresses the mechanisms by which transcription-dependent plasticity can occur at subsets of the thousands of synapses that are made by an individual neuron. Dr. Martin and her colleagues have shown that one important mechanism for restricting gene expression to stimulated synapses involves the regulated translation of synaptically localized mRNAs. Studies in her lab are aimed at identifying the populations of mRNAs that localize to synapses, the molecular mechanisms underlying the localization and translation of these mRNAs, as well as the function of local translation in long-term memory. Recent transcriptome and translatome profiling experiments suggest that the regulation of gene expression in neurons is highly decentralized and compartmentalized during plasticity, with transcriptional regulation placing the entire neuronal arbor in a state of readiness to respond to local cues via local translation to change the structure and function of subsets of synapses.