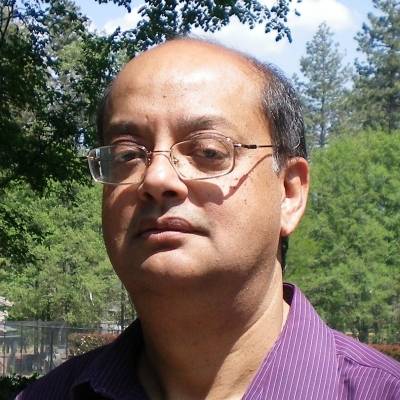 Utpal Banerjee is the Irving and Jean Stone Professor and Chair of the Department of Molecular, Cell and Developmental Biology at the University of California, Los Angeles with a joint appointment in the Department of Biological Chemistry at the David Geffen School of Medicine. In addition, he serves as Co-Director of the Broad Stem Cell Research Center and as Director of the UCLA Interdepartmental Minor in Biomedical Research. He is also a member of UCLA’s Jonsson Comprehensive Cancer Center and is affiliated with the Brain Research Institute and the Neuroscience Graduate Program. He was amongst the first cohort of professors nationally to be awarded a $1 million grant and named HHMI Professors by the Howard Hughes Medical Institute to creatively improve undergraduate science teaching.

UCLA named Banerjee one of the “Best 20 Professors” of the “Bruin Century.” He has also been recognized with the Luckman, Ebi, and Gold Shield awards, the highest research and teaching awards in any subject, including Humanities and Social Sciences at UCLA. In 2008, Banerjee was inducted as Fellow of the American Academy of Arts and Science. In 2009, he was named the Irving and Jean Stone Chair in Life Sciences and was elected Fellow of the American Association for Advancement of Science. In 2010, the Genetics Society of America awarded him with the Elizabeth W. Jones Award for Excellence in Education. And in 2011, Banerjee was awarded the National Institutes of Health Director’s Pioneer Award.

A native of New Delhi, India, Banerjee earned his Bachelor of Science degree in Chemistry from St. Stephen’s College, Delhi University, India and obtained his Master of Science degree in Physical Chemistry from the Indian Institute of Technology, Kanpur, India. In 1984, he obtained a Ph.D. in Chemistry from the California Institute of Technology. His transition into Biology was earmarked by his postdoctoral research training with Dr. Seymour Benzer at Caltech where he initiated research in molecular neurogenetics of eye development in Drosophila. At UCLA, Banerjee’s laboratory has worked on several oncogenic and metabolic signals that are important in development and disease. His laboratory studies the effects of systemic signals on the maintenance of blood progenitors in Drosophila. He also studies the role of metabolic pathways in the control of proliferation and differentiation in the preimplantation mouse embryo.

1. Blood Stem Cell Maintenance
Hematopoietic stem cells are maintained within a microenvironment where signals from a niche are important for the maintenance of quiescence within a precursor population. Lack of such a niche-derived signal will cause loss of “stemness” resulting in increased proliferation and eventual differentiation. We study this phenomenon in the Drosophila hematopoietic organ using genetic technologies available in this model organism (see Martinez-Agosto et al., Genes & Devl., 2007 for a review).

We have shown that the “stemness” of these cells is maintained through the combined action of a Niche Signal, generated by Hedgehog (Hh) (Mandal et al., Nature, 2007), a local signal generated by Wingless/Wnt (Sinenko et al., Dev. Cell., 2009) and a reverse signal from the differentiated cells to the stem cells that we have termed the Equilibrium Signal. Several important concepts underlying Drosophila blood development have allowed us to propose this system as an appropriate genetic model for vertebrate hematopoiesis and these molecular mechanisms are being explored in the laboratory.

2. Stress Response systems
Myeloid blood cells are ideal for the study of response to many kinds of stresses. Hypoxia-related factors and free radicals known as reactive oxygen species (ROS) play a role both in hematopoietic development and in stress response (Owusu-Ansah and Banerjee, Nature 2009). Similarly, the NF-kB derived inflammatory response plays a major role in the way blood cells respond to injury at distant sites. The emerging view from these studies is that basic developmental mechanisms are co-opted again for stress, injury and inflammatory responses by the myeloid hematopoietic system. Genetic analysis allows us to understand the interrelationship between these important biological phenomena that have great relevance to diseases and disorders in humans.

3. Metabolic control in Cancer pathways
In the past, our laboratory has identified components of signal transduction pathways that participate in oncogenesis (see Bonfini et al., Science, 1991; Flores et al., Cell 2000 for examples). We have also studied the role of the mitochondrion in controlling cell-cycle (Owusu-Ansah et al., Nature Genetics, 2008; Mandal et al., Dev. Cell, 2005). When cells become transformed, they choose alternate means of metabolism (a phenomenon referred to as the Warburg effect). We study the effect of signal transduction pathways on the control of cellular metabolism and the proper balance between cellular growth and metabolism that goes awry in Cancer.

4. Metabolic control of early mouse development
We also explore the control of metabolic pathways and mitochondrial activity and biogenesis during development using early mouse embryo and the embryonic stem cells derived from them as a model. There is relative lack of data on the mechanisms that control transition between various modes of metabolic activity during phases of development. Nuclear and mitochondrial activities constantly modulate each other, and the relationship between signal transduction pathways commonly studied during development, cancer and stem cell maintenance and metabolic pathways such as oxidative phosphorylation, glycolysis, mitochondrial biosynthesis and nutrient sensing are being explored. Immediate projects include determining the metabolic processes that are essential for zygotic transcription, and the switch between mitochondrial and glycolytic processes during early mouse development.