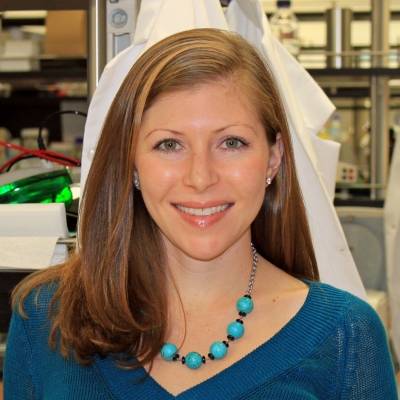 Dr. Christofk received her B.S. in Molecular, Cell, and Developmental Biology from UCLA in 2001.  She conducted undergraduate research on growth factor receptor tyrosine kinase-mediated signaling pathways in the laboratory of Hong Wu for three years before heading east for graduate school at Harvard in 2002.  As a Ph.D. student in the laboratory of Dr. Lew Cantley, Dr. Christofk discovered an important role for the M2 splice isoform of pyruvate kinase (PKM2) in cancer metabolism and tumor growth.  She elucidated a novel regulatory mechanism by which tyrosine kinase signaling pathways directly impact metabolism through modulation of PKM2 activity.  Dr. Christofk completed her Ph.D. in 2007, and joined the laboratory of Dr. Frank McCormick at UCSF as a postdoctoral researcher where she studied additional mechanisms of cancer metabolism regulation.  In 2008, she returned to southern California and joined the faculty at UCLA.  Dr. Christofk is a Searle Scholar and has been awarded a Damon Runyon-Rachleff Innovation Award and the NIH Director’s New Innovator Award.  Her research continues to focus on the interconnection of growth factor signaling pathways and metabolism, with the overarching goals to understand how metabolism is regulated in cancer, and how to target altered metabolism for therapeutic benefit.